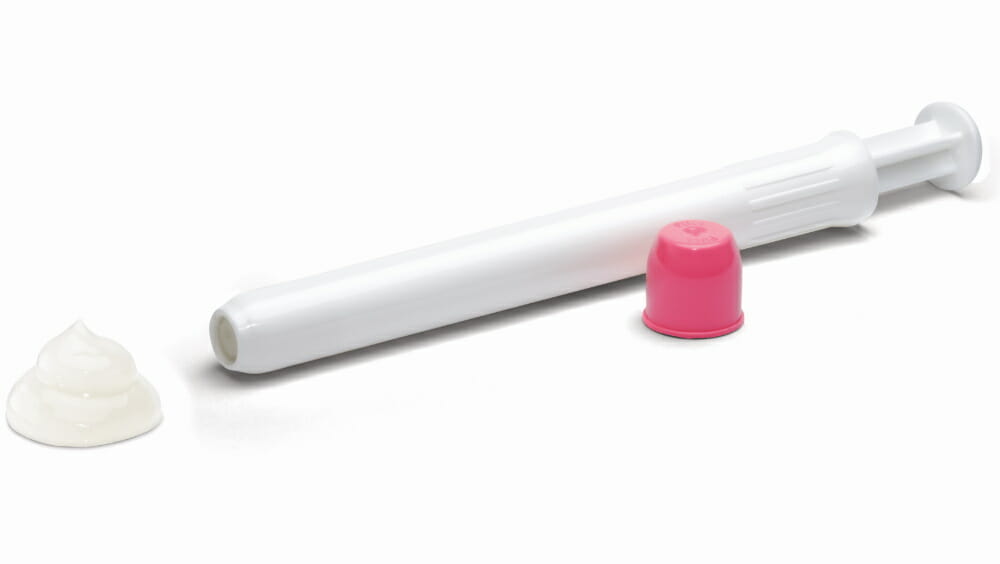 On May 22, 2020, the U.S. Food and Drug Administration (FDA) approved a new contraceptive method, “Phexxi,” expanding the number of non-hormonal, on-demand options available to users who can become pregnant. Made by Evofem Biosciences (and previously known as Amphora), Phexxi is a contraceptive in gel form that can be used instead of traditional spermicides.

How Does Phexxi Work?

Phexxi is used right before penis-in-vagina sex. It works by taking advantage of the vagina’s natural acidity and sperm’s vulnerability to acidic environments.

The natural pH of a healthy vagina ranges from 3.5 to 4.5 (moderately acidic) but during sex, semen (the fluid that contains sperm) raises the vagina’s pH to 7 or 8 (neutral or mildly basic) in order to create an environment that is livable for the sperm. Phexxi works by keeping the vaginal pH within the vagina’s normal pre-sex range, counteracting the influence of the semen and incapacitating the sperm. The gel is comprised of lactic acid (which is naturally produced in the vagina and is found in dairy products like yogurt and kefir), citric acid (which gives citrus fruits their tart, sour taste), and potassium bitartrate (used in cooking as cream of tartar).

Phexxi comes in a box of 12 pre-filled applicators, each with a 5-gram dose. One dose is inserted into the vagina up to an hour (60 minutes) before having penis-in-vagina sex. The user needs to insert another dose if they want to have sex again with one hour. Phexxi is not effective when used after sex. Phexxi can be used on its own or in conjunction with barrier methods such as condoms, cervical caps, and diaphragms for increased effectiveness. (For a complete list of barrier methods and how to use them, see our article on “Vaginal Barrier Methods.”)

Phexxi can be used any time during a person’s menstrual cycle and as soon as it is safe to have sex again after giving birth, having an abortion, or experiencing a miscarriage.

Phexxi is not currently approved to protect against sexually transmitted infections (STIs), including HIV, the virus that causes AIDS.

How Is Phexxi Different from Spermicide?

Like Phexxi, spermicide is inserted into the vagina immediately before penis-in-vagina sex and can be used in combination with barrier methods like condoms, cervical caps, and diaphragms. Spermicide comes in the form of cream, gel, foam, dissolvable film, and suppository. In the U.S., the only FDA-approved spermicides contain nonoxynol-9 (N-9), a detergent which works by damaging a sperm’s cellular membrane. While spermicide is likely safe for most people, N-9 can damage the cells in the vagina, particularly after repeated use. As a result, N-9 can lead to an increased risk of sexually transmitted infections for sex workers and others who have sex multiple times per day. In contrast, Phexxi has a different mechanism of action than N-9 and is not expected to damage the vaginal wall.

How Do You Get Phexxi?

The hope is that Phexxi, like many other prescription contraceptives, will be covered by the Affordable Care Act (ACA) without co-pay or deductible. The ACA’s contraceptive coverage mandate currently requires insurance companies to cover at least one method from each of the 18 FDA-approved types of contraception (see box). But the ACA does not require insurers to cover every product in each category.Unlike many N-9 spermicides which are available over the counter (meaning, without a prescription), you need a prescription from a health care provider to get Phexxi.

If Phexxi is categorized by the FDA as a spermicide because both methods are used in similar ways, it might not be covered if an insurer decides to cover a different method in its “Spermicide” category. Phexxi’s manufacturer is currently seeking the creation of a new category by FDA, in recognition of its different mechanism of action from N-9 spermicides. The NWHN supports these efforts. While the user experience with Phexxi might be similar to that of N-9 spermicides, the biological mechanism of action is very different, in the same way that the user experience of two IUDs may be similar but the biological mechanism of a copper IUD is very different from that of a hormonal IUD.

How Effective & Safe is Phexxi?

Based on data from clinical trials, Phexxi used on its own (versus in combination with another method) appears to be modestly more effective than N-9 spermicide and internal (female) condoms and modestly less effective than external (male) condoms. Dr. Shefali Pathy, an OB-GYN and professor at Yale School of Medicine, estimates that for “approximately 15 women out of 100, it’s going to fail.”

For added pregnancy protection, Phexxi can be combined with other methods like oral contraceptive pills, condoms (internal or external), or an IUD. The FDA label cautions against the use of Phexxi in conjunction with vaginal rings.

Side effects (experienced by approximately 2% of participants in clinical trials) included vulvovaginal burning sensation, itching, yeast infection, discomfort, and pain; bacterial vaginosis and vaginal discharge; genital discomfort; and pain while urinating (dysuria). More serious side effects (experienced by 0.36% of participants) included bladder inflammation (cystitis), kidney infection (pyelonephritis), or another upper urinary tract infection (UTI). These side effects are the reason that Phexxi is not recommended for people with a history of recurrent UTIs or urinary tract abnormalities.