My son Jack’s birth in August 2014 was an exhilarating experience that left me exhausted and fulfilled. During the months that followed, I spent many hours reliving the moments leading to his birth. I can still remember the tempered excitement, pain, fear of more pain, and the wonder of seeing a little naked perfect body for the first time. These are precious memories of motherhood that I am grateful to have experienced.

I had a much different experience two and a half years earlier on the January morning when my daughter Amelia was delivered by caesarean section. The prospect of a C-section emerged in the 30th week, when the midwife-physician practice we used commented that Amelia was too small for her biological age. She was labeled with intrauterine growth restriction (IUGR); as time progressed, additional complications arose, including breech position, and low amniotic fluid.

For most of the pregnancy, I was in denial that there could be something wrong with my first baby, despite the fact that doctors and nurses continually reminded me about all of the possible bad outcomes. They dutifully described how the baby could arrive with brain damage or other severe defects. While my prenatal appointments increased in frequency in response to these emerging problems, I suppressed my fears and remained committed to having our baby delivered at full term. But, at 38 weeks, following the emphatic advice of my doctors and midwives, we gave in and my husband and I went to the hospital for a planned cesarean.

I can’t recall every detail, but I do remember that I was scared and felt a dark guilt that I’d done something that had irreparably harmed our baby. Then I found myself being rolled into the OR, a passive participant in the birth of my first child.

Amelia was born at 4 lbs 12 oz and, to everyone’s relief, healthy by all measures. I was in worse shape. Numbed and traumatized by major surgery, I did not immediately feel the bonding attachment or love for my newborn — a hard admission to make. After some unwelcome nudges from my midwife and husband, I managed to start breast-feeding our little girl shortly after the delivery.

I don’t second-guess the decision to have the caesarian — how can you when your baby comes out healthy? There are many aspects about the experience and ensuing recovery, however, which I regret. The two days spent in the hospital were miserable. I experienced a post-anesthesia headache that felt like a metal claw was lodged into the back of my skull every time I sat up. The breastfeeding consultants, while well-meaning, promoted techniques that involved resting Amelia’s weight on my surgical wound, causing pain and preventing the joyful bond that only came later.

After arriving home, getting upstairs to our bedroom was so onerous that I didn’t want to come back down. Walking and turning remained painful and difficult because of the destabilizing effect of the surgical wound on my lower abdomen. Amelia’s innocent and inadvertent kicks to my wound caused me to resent my choice to breastfeed her. Even a year after Amelia’s birth when, by outward appearance I may have been a youthful and energetic mother, I could still feel a weird tightness and discomfort from the incision when I ran or lifted my child.

Only now do I fully understand how my caesarean adversely impacted the birth experience. I was fortunate, with Jack, that I was able to find a practice committed to vaginal birth after caesarian (VBAC) and an experienced doula willing to help me with the labor, most of which I had hoped to do at home.

When I went into labor, our doula came over, confirmed our birth plan, and then left after telling us to call back when contractions were consistently four minutes apart. My husband, not knowing what else to do, fired up the grill and made BBQ chicken. And then we went to bed.

At 2:00 am the contractions reached the requisite rhythm. Our doula arrived shortly after I vomited my dinner, but just in time to provide the necessary back support to make my contractions just bearable. At one point, I wondered whether the sweating, shaking, and screaming through contractions was better than a caesarian. But then my body’s natural endorphins began to blunt the pain and I actually fell asleep between contractions. By 7:30 am, the doula said we were getting close. With no sense of urgency, we got ready. We arrived at the hospital at 8:35 am. My water broke upon entering the delivery room. And, much to everyone’s surprise, Jack emerged shortly thereafter, at 9:04 am.

I then experienced the wonder of meeting my newborn child; feeling his soft skin against mine; memorizing his every little feature. No sensation of pain distanced us in those first few hours. There was no discomfort when I breastfed. I could move around as needed. Absent were any distractions to the bonding process. I enjoyed my son’s infancy in a way that I couldn’t with my daughter. I can’t help but think that this meeting and falling in love between mother and infant was stolen in my previous caesarian birth.

In 2013, one-third (32.9%), of U.S. births were by caesarean; over one-quarter (26.9%) of these occurred in low-risk pregnancies and were medically unnecessary. Only about 10% of women who have had a caesarean have a vaginal birth in a subsequent pregnancy.1  Why do women have this repeated major surgery, with all of its attendant risks? Possible reasons for high caesarean and repeat caesarean rates include the current medical/legal climate, hospital staffing, more favorable insurance coverage for caesareans, and the increased time physicians spend to achieve a VBAC versus caesarean.2 Many physicians believe VBAC is dangerous, and finding a physician or hospital willing to allow a trial of labor (TOLAC) rather than automatic VBAC can be difficult for many women. A 2010 NIH consensus on VBAC found that, since 1996, an estimated one-third of hospitals and half of all physicians no longer offered TOLAC to women.3

Doctors have clear incentives to recommend caesareans: the procedure may increase physician’s reimbursement, takes a predictable amount of time and can be conveniently scheduled, are relatively simple and safe, and lower liability risk. In situations like ours, the overall risk to the delivery process may be reduced.

Low risk and high reward is a nice combination for medical professionals. But, the overall cost should also include the emotional and physical costs from recovery, non-pecuniary costs that medical professionals may not weigh in their calculus of the best options. The overall birthing experiences in this country would improve with careful consideration of these effects. 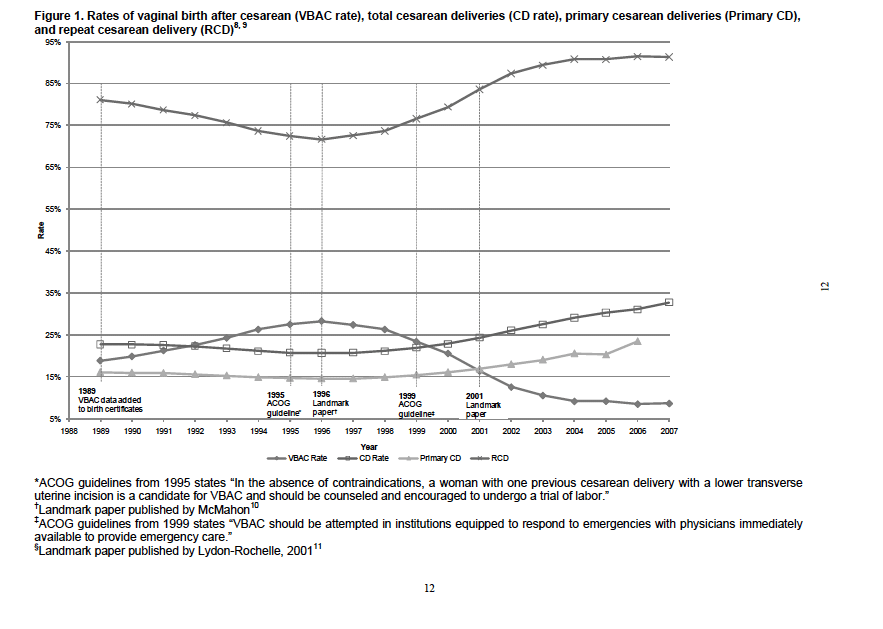 This article was written by: By Suzanne Bauguess

Suzanne Bauguess is a graduate of Georgetown University’s Complementary and Alternative Medicine Master’s program. She lives in Washington D.C. with her husband, two young children, and their Labrador, Clara.