HomeGet Involved with the NWHN!Dr. Philip Corfman endows fund for women’s health leaders of the future

You can’t quite see him in the film clips, but he’s there. Wearing a very 1960s suit and tie, Dr. Philip Corfman is seated at the witness table, reading testimony he prepared in response to Senator Gaylord Nelson’s (D-WI) questions about how much federal government researchers knew about oral contraceptives’ safety. As the physician in charge of contraceptive research at the National Institutes of Health (NIH) in the 1970s, Dr. Corfman was accustomed to giving his expert opinion about oral contraceptives in an academic manner, without many interruptions.

But that wasn’t exactly what happened at the Senate hearing held on January 23, 1970. What did occur, including Dr. Corfman’s response, led to an enduring relationship of respect and support between Phil Corfman and the National Women’s Health Network that continues to this day. It also created great film clips, some of which were included in the PBS documentary “American Experience: The Pill”.

On that day in 1970, Dr. Corfman unexpectedly found himself in the center of a feminist protest when DC Women’s Liberation disrupted his first attempt to testify at the U.S. Senate hearing on oral contraceptives and patients’ right to information. Members of the DC Women’s Liberation, led by Alice Wolfson, were furious that the senators had organized a hearing about women’s health—without seeking testimony from a single woman. They used civil disobedience techniques to repeatedly disrupt the Senate hearing and insist that decision-makers hear from women themselves about their experiences, advocating that only in this way could any solutions be truly responsive to women’s concerns. In disrupting the hearing, the women also wreaked havoc with Dr. Corfman’s first attempt to give his testimony. But, instead of being offended, when the room was finally quiet enough to continue the hearing, Dr. Corfman turned to the senators and said that “many of the questions the women posed were valid and important”—an unexpected vote of support from a White male ObGyn!

Phil’s respectful attitude towards women’s right to information about their own bodies wasn’t just a one-time gesture. After the hearing, Phil took the time to get to know Alice Wolfson, Barbara Seaman, and other women’s health activists who were concerned about this issue. He agreed with what they were trying to do, and he used his influence to become a powerful behind-the-scenes supporter of both the activists and the organization they eventually created—the National Women’s Health Network.

Forty years later, Phil Corfman remains a strong and steadfast supporter of the NWHN. In 2007, Phil told us that he was thinking about making a large gift in the form of an endowment. He was especially interested in supporting individuals during the early stages of their involvement in women’s health, such as our interns. “It’s a way of building human capital,” he said, describing why the internship program is so important to him. With Phil’s encouragement, the NWHN used his gift to launch the Eunice Corfman Internship Fund, named in honor of Phil’s late wife.

The Eunice Corfman Internship Fund awarded its first stipend in the summer of 2008 and to dozens of interns since! 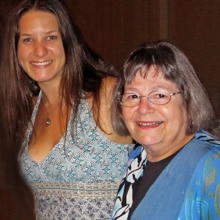